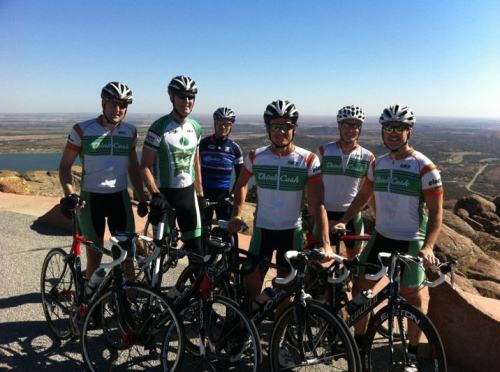 The "Pain Train" crew @ the top of Mt. Scott

This year’s camp was dubbed “Pain Train III: Stomach Full of Anger” in honor of Andy Schleck. Instead of our usual camp at Lake Texoma, we headed across the border into Oklahoma and the Wichita Mountains Wildlife Refuge. 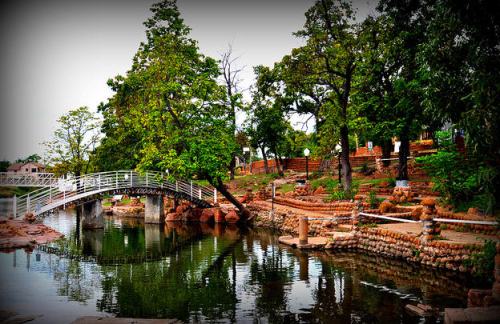 We headed up to Medicine Park, OK on Friday afternoon. Medicine Park is situated in the Wichita Mountains near the entrance to the 60,000-acre (240 km2) Wichita Mountain Wildlife Refuge. Medicine Park has a long history as a vintage cobblestone resort town. The town was also just a couple miles from the focus of our trip – the 2.7 mile climb that is Mt. Scott (the biggest climb within a 3 hour drive of DFW). 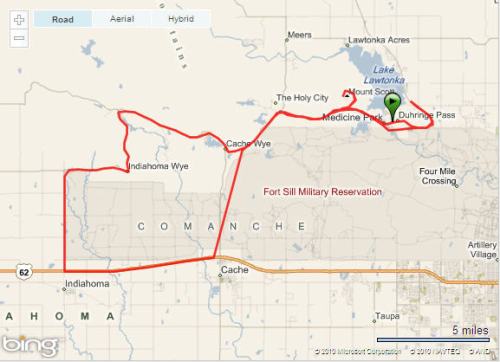 The riding in the refuge is SPECTACULAR! It was much prettier than I expected and had some nice change in elevation. However, the best part might be the glassy smooth pavement with almost no car traffic – it was fantastic.

On Saturday morning we headed out on a 50 mile loop through the refuge before doing a “Gentlemen’s Race” up Mt. Scott. The Mt. Scott climb is about 2.7 miles long at 7.5%. It’s very consistent since there are no switchbacks; instead, the climb literally corkscrews up the mountain.

Everyone put in a great performance considering the considerable wind and the fact that we already had 50 miles of “spirited” riding in our legs. I made it up in 14:27 at an average power of 311 watts (~4.7w/kg). 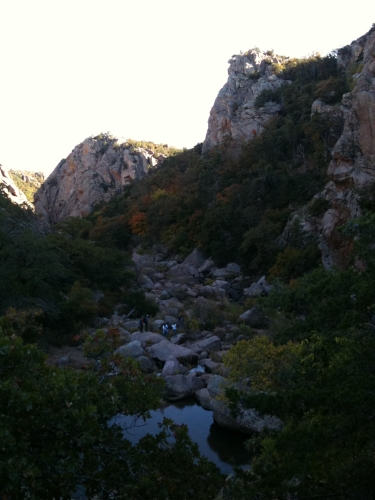 After  the ride Kevin D. took us on a hike to see some of his favorite climbing routes. If someone dropped you in that location blindfolded, by helicopter, you would have no idea you’re in Oklahoma.

For dinner we headed over to the world-famous Meers Store and Restaurant.  Pulling up to the restaurant is like traveling back in time to when the area was part of the wild frontier and the Wichitas were supposedly rich with gold.  Meers began as a gold mining town which boomed to 500+ people , but now the only residents are the owners of the famous store. 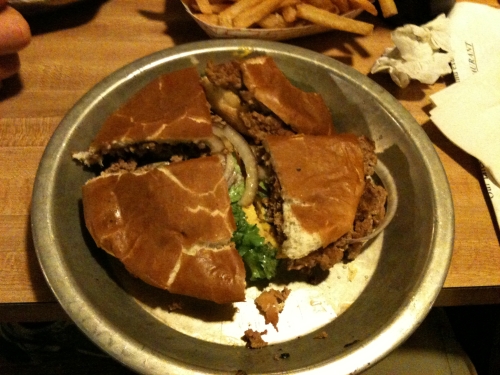 They’re famous for their longhorn burgers (which are huge and very tasty). Everything at Meers is big, including desert – my “bowl” of ice cream was probably half a gallon.

Sunday we got up early for a short loop and one more time up Mt. Scott before heading home. I can’t believe it took me this long to “discover” the Wichitas, I’m already planning my next weekend trip to Medicine Park.