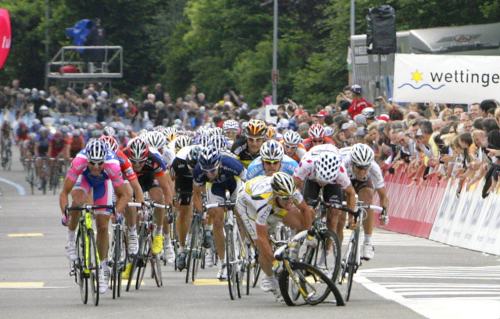 If you saw video of the sprint crash on stage 4 of the Tour de Suisse, it was ugly. It appeared as if Mark Cavendish changed his line and ran into Henrich Haussler – taking out Gerald Ciolek, Tom Boonen and others. However, after seeing the picture above it looks like the erratic move could have been caused by a bad front wheel. I’ve experienced a crash involving a taco’d front wheel . . .  and it is no fun. Get well to everyone involved and hopefully everyone is 100% in time for the Tour.

Be careful when flying with a bike

As someone who regularly flies with a bike (American no less), this video is both funny and scary; although, it’s not nearly as damning as the United Airlines guitar video. American’s customer service is generally pretty crappy, but the damage to this guy’s bike is inexcusable. It’s like American gave his bike box to the gorilla from the old American Tourister ads (see below)

The accusation in the video above is just crazy enough to potentially be true. The technology exist to hide a small motor in a racing bike; in fact, it’s been around since 2007.  Check out the video above at about the 3:30 mark. It shows a Cancellara breakaway in both spring classics. Each time he “motors” (cheap-pun-opportunity) off the front  after moving his hand to the front of a brake lever, which is where the supposed location of a button that controls the hidden motor would be.

The video was  filmed after Italian newspapers reported that some riders in the Giro d’Italia were using bikes fitted with electric motors and then switching to unpowered bikes before stage finishes to avoid detection.

However, if you remember the ride above (who can forget), Fabian has always had a HUGE motor (no pun intended this time) and he did this in 2007 (theoretically before the in bike motor could have been hidden as well). Also, this blog has an amazing analysis of Fabian’s attack at Roubaix that proves it is plausible.

Kevin D. is always joking on our hard rides that someone needs to invent a motor good for a 200 watt boost. Someone has . . . and maybe someone has used it at the highest level?